With a long weekend there are always many competeing demands for the time available but I wanted to fit in an activation or two.  Saturday and Sunday were both committed to other things and I still didn’t really have a plan come Sunday evening.  It was over breakfast at around 0730hrs local time on Monday morning that I decided to commit the day to SOTA.

I needed somewhere local as the day would fast dissapear and I always like to fit in more than one summit in a trip if at alll possible.  Having activated Mt Bride VK3/VC-009 and Britannia Range VK3/VC-011 in 2013 I decided they fitted the local requirement and was fairly sure I could find them again without much trouble.  I’d heard it mentioned by Glenn VK3YY and possibly others that Hyde Hill was also achievable in a day with these two so it was added to my list.  With barely time to pack I didn’t stop to post alerts.  I was confident for once with a Telstra wireless 4G internet device and Ipad I would be able to self spot.

Lunch was hastilly made while batteries charged and the recovery gear and chainsaw loaded into my Great Wall X240 wagon.  I set off a little after 0930hrs local time.

A quick stop for fuel and I drove straight to Mt Bride, leaving Warburton Hwy on Old Warburton Rd which becomes Mt Bride Rd and then left on to Burns Rd and parked opposite the track to Mt Bride which is now only wide enough for walking or trail bikes.

It’s a straight forward short walk up the track and I was on air about 0115hrsUTC. 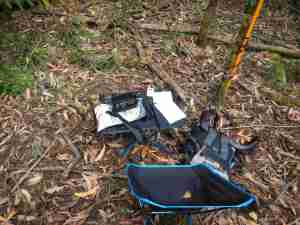 After seeing the Helinox lightweight table and chairs thanks to someone on the Au SOTA yahoo list I bought a set for the family for christmas 2013 and now carry a table and chair on most activations. 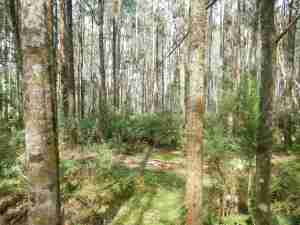 View of the track from my operating position on Mt Bride.

The activation started with a Summit to Summit with Nick VK3ANL on VK3/VU-011 and later another S2S with Glenn VK3YY on Mt Strickland VK3/VN-030.  Thanks to Glenn for the SOTA complete.  A total of 18 contacts all on 40M in 20 minutes.  With two more summits on the list it was timeto move on.

I followed Mt Bride rd on to Britannia Range track which I was going to attempt to drive.  However there was a group of arround six mostly better equiped four wheel drives parked at the bottom of the track.  With one parked blocking the entrance to the track.  They claimed they’d had a pajero on two wheels and there was no way my vehicle would make it.  I enquired as to whether the track was worse than last year when I’d had driven half way up but they didn’t seem to have any depth of local knowledge.  As they didnt’ seem to be getting organised to move any time soon I decided to park and walk the 1.2km or so according to my GPS.

There are deeper wheel ruts than I remember but I probably could have driven it.  I walked up the track to the closest point and then went bush.

Operating position in the small clearing on top of Britannia Range.

The clearing is a very welcome change after the fight through the undergrowth.

Fourteen contact in as many minutes on 40M including another S2S this time with Ian VK1DI portable in VK2 on VK2/SW-034.

I then packed up and hit the bush to start the journey to Hyde Hill.Once back to Britania Range track then down to the car I continued along Mt Bride Rd to Blacksands Rd.  This apears to be a left turn on the map but one seemed to merge in to the other while driving.  I followed Blacksands Rd to Big Creek Rd and turned right, parking a short distance from the intersection.

View of Hyde Hill VK3/VC-008 from where I parked 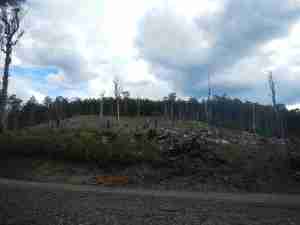 It’s six hundred and something meters from where I parked straight line to the summit with most of the first five hundred pretty clear thanks to logging.  Once at the tree line I found the beginning of a track that ended almost immediately and it just got thicker from there.  After nearly loosing the squid pole from my pack and ending up with a nice scratch undermy right eye from a tree branch or sword grass I’m not sure which I got to within fifety meters of the designated summit and was no longer gaining height so I decided that was close enough.  I prefer to find the top if possible rather than worrying about being just inside the activation zone.

The trouble with this summit is finding somewhere to set up.  No fancy table and chair this time.  I put up my 20/40 dipole and activated from a log while flicking leaches from my pants. 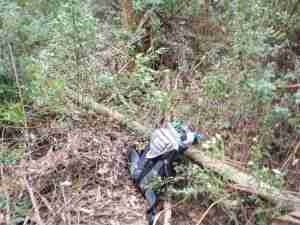 Operating position before I unpacked. 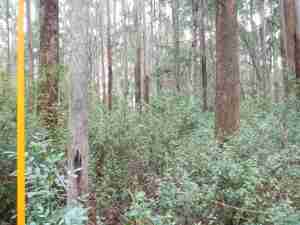 The view from my antennal mast.

I was on air at 0553UTC 2 hours and 9 minutes from my last qso on Britannia Range.  a total of eleven contacts again on 40M including a VK5 National Park thanks to Paul VK5PAS, the last contact of the day just after 0600UTC.

I’d seen dark clouds aproaching as I entered the bush and due to the less than comfortable operating conditions and need to become best mates with the undergrowth again I packed up once the chasers dried up.

Once back at the car I retraced my path back out to the Warburton Hwy and headed home.

Thanks to all for the contacts.

I will take the time to work more bands on my next outing. 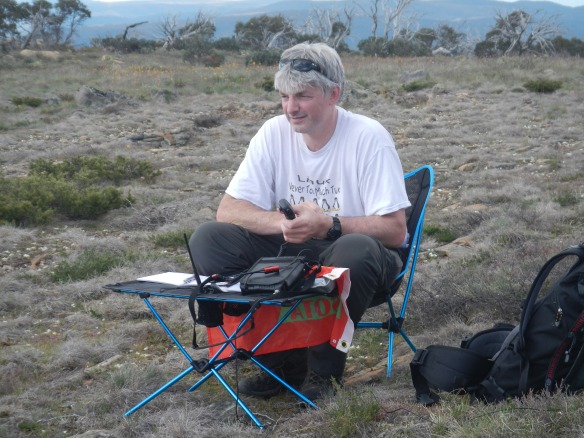